The zeal with which the Christians addressed the political atmosphere over the last year seems to have been unparalleled in past elections. Editorials and expressions of opinions, which were based on fact or fiction, were scattered throughout the populace. It was the hope of the expositors of personal belief that there would be a turning from confusion to a certainty of belief based upon their understanding of the Word of God. These agents of zeal should be commended for their efforts to try and stabilize this country of shifting moral and ethical standards.

The question is, was their motive one of self-interest or was it in the interest of the Body of Christ? Were they directed by God or was it a promotion of their agenda? How big a role did the Christian community play in the Presidential Election? Now that it is over, can the Body of Christ say in confidence that the reelection of our President was the will of God? Local churches throughout the land held prayer vigils to petition God to have the right man elected. Are we to assume that the prayers were heard and that the reelection of the President to another four years was the answer to the petitioning saints? If the Church believes the wrong man was elected, does that mean their prayers went unanswered?

To many Christians, there seems to be a glum and doom atmosphere; depression to some, and human prophesy of difficult days ahead by others. Some Believers are using carnal weapons of fiery darts to fly accusations toward the duly elected President. The pre-election zeal of Christians has become the post election standard of behavior. Instead of bringing healing to our land, the Believer continues to keep the wound of separation open.

Why are we surprised at the way this country is going? Are we so ignorant of Scripture that we fail to recognize the signs of the end of the age? The Church needs to recognize that we are in the last days and what is needed is not offensive behavior, but zeal to lead people to God through His Son Jesus Christ. If the Believer would spend as much energy on representing the Kingdom of God as he does in opposing political agendas, there might be enough Believers in this country to vote responsibly and thus give this land an extension of life expectancy.

Every Christian needs to understand that the powers that be are “ordained” of God. (Rom. 13:1) It is imperative we understand that God has everything under control. God loves this country [its people], but He will also chastise it. How He will do that is not to be a concern of ours. We are called to be a witness of His love, not a rod of judgment. We are called to be a peace maker, not a tool of division. We are not called to expose the obvious, but to present the hidden treasure of Jesus Christ. Abortion is wrong, new birth is right. Homosexuality is wrong, joined to Christ is right. Artificial highs are wrong, overdosed in Jesus is right.

Let this country hear that there is an answer to its problems. It is not by hearing what is wrong with it, but rather how right it can be when it returns to its Creator. 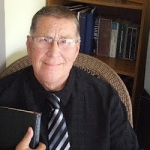