The first and often least recognized end time prophecy is found in the curses God gave at the Garden of Eden. We know about Adam and Eve being expelled and cursed; we know about the Satan serpent. Man will be expelled from the Garden and labor but the sweat of his brow [Genesis 3:17-19] to feed his family. Women; I will now greatly increase your pain during child birth will *now have pain delivering children [Genesis 3:16]. There will be enmity between the serpent and the woman

The snake in the Garden of Eden:

Genesis 3:14 & 15 state: God saith unto the serpent, `Because thou hast done this, cursed art thou above all the cattle, and above every beast of the field: on thy belly dost thou go, and dust thou dost eat, all days of thy life; and enmity I put between thee and the woman, and between thy seed and her seed; he doth bruise thee–the head, and thou dost bruise him–the heel.’ [YLT]

This highly suggests the snake in the garden was not one that looked like the snake as we know it today…sneaking and sleuthing through the grasses and in the tree branches. Every depiction we have today of the Eve and Satan encounter shows the snake already belly-bound. This is NOT what scripture tells us. It says “from now on…”

Genesis 3:14 So the LORD God said to the serpent, “Because you have done this, “Cursed are you above all livestock and all wild animals! You will crawl on your belly and you will eat dust all the days of your life.” The obvious is missed. Up to this point in the Garden of Eden incident, the snake did NOT crawl on its belly and eat dust. Our depiction of this moment in the history of mankind is totally wrong per imagery.

Genesis 3:15 tells us an end time prophecy most miss. “And I will put enmity between you and the woman, and between your offspring and hers; he will crush your head, and you will strike his heel.” It is found with careful reading…”he will crush your head.” Note the gender change from a woman to “he.” The King James uses the word “it.” None the less, the change in the ‘who’ is in the verse itself.

Israel is often identified as a woman in end time prophecies. Just as the church is the bride of Christ; i.e. an identity of a woman, so is the nation of Israel. As has been true since the start of the church age at the cross, Satan has bit at the heel of the church and the church has tried to crush the head of Satan through prayer and worship of God the Father, Son and Holy Spirit.

Genesis 2 continue… (YLT) And Jehovah God doth make to the man and to his wife coats of skin, and doth clothe them.

Gen 3:22  And Jehovah God saith, `Lo, the man was as one of Us, as to the knowledge of good and evil; and now, lest he send forth his hand, and have taken also of the tree of life, and eaten, and lived to the age,’ —

It is obvious after reading v22 that there was another tree in the Garden; i.e. one of eternal life. Two or three conclusions for end time come from this verse in Genesis 3.

1.     The other tree in the same Garden is one of eternal live eternal life. Jesus paid the wages of sin on the tree or cross on Golgotha and now we can take of it and live up to, through and beyond the end time. 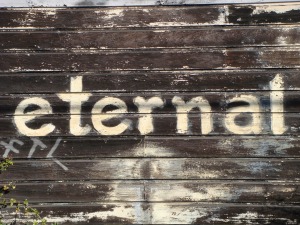 3.     This (#2) being true, then Angels and Satan’s motley crew are already eternal. This however does not make him, them or us without consequence for our sins.

There is another analogy that needs to be mentioned. The Tribe of Dan is NOT included in the 144,000 mentioned in either Revelation 7 or 14.” Dan will be a serpent by the roadside, a viper along the path that bites the horse’s heels, so that its rider tumbles backward.” (Gen. 49:16-18). Note the similarity of a snake and the biting at the heel; Genesis 3:15 and the prophecy of the Tribe of Dan in Genesis 49:16-18. The question not asked often enough is who is crushing the head of the snake? , “who is the ‘her’ in 3:15 who becomes a he in the next sentence?” Is it the horse’s heel and the rider? This is not as mysterious as one might make it to be.

We cannot write in a single blog the connectivity, but it is there for the student of the bible to seek and to find. What started in the Garden of Eden will end with the people of God (Israel) and the people of the Church (Jesus) having total victory of Satan.

What about the Tribe of Dan? When Dan “leaped out of Bashan” (Deuteronomy 33:22) after migrating north from the land area originally assigned by Joshua to that tribe, they conquered Laish (Judges 1:16-20) in northern sector of the territory of Bashan. They did not take the Lord God with them. They took idols and their wicked ways with them as the marched out of Bashan. They deliberately left the Promised Land refusing to conquer it.

We will go deeper into this historical and detailed filled discussion next fall in a series entitled, Which Way Did They Go?

Needless to say but we will anyway, the 144,000 mentioned twice in Revelation, do not include Dan. Dan left God behind, not the other way around. Dan’s offspring may be those who may be the last and perhaps the least to respond to God’s end time call. They may likely be some of those who respond in or during the tribulation; a time called Jacob’s Great Troubles. But, the Tribe essentially rejects the promise of the Promised Land. Consider this…what about modern day rejection of God even after knowing about the Promised Land in heaven? Can we give up on what Jesus promised us as believers and “do it our way?”

If one no longer feels as close to God as s/he once did; guess which one moved?