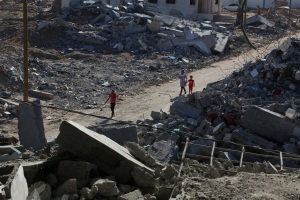 Is it ironical, paradoxical or prophetic? The very same land Jeremiah 47 is talking about, Philistia, is still a major issue to Israel today; Gaza Strip. It has been a thorn in the side of Israel/Judah since Israel of old was established as a confederation of tribes in the Book of Judges. The Tribe of Dan was to destroy them but instead abandoned their Joshua assigned territory. They went north of Israel, conquered Laish, a city of isolated Sidonians, and renamed it Dan.

Philistia/Gaza has been there a long time. Jeremiah, as he prophesied in chapter 46 the troubles of Egypt, he in Jeremiah 47 warns them of their present and future fate…God’s direct judgement.

Egypt currently borders Gaza. It was the same in Jeremiah’s time. For him to warn these people as God commanded, it would be a short journey to get there. What is of some interest in chapter 47 is stated in the first verse of chapter 47, “…before Pharaoh struck down Gaza.” However, Jeremiah warns them of a flood tide enemy from the north. Egypt is located to the south of Gaza, Babylon is due-east. Jeremiah 47:2…”Thus says the LORD: Behold, waters are rising out of the north…” Commentaries often take the easy way out and forget geography in that process.

There is little reason to question whether or not Babylon overran this territory as it moved into Egypt to do the same thing. However, it remains there today; Gaza Strip, Palestinians, sworn enemies of Israel. Could there be more to this passage in Jeremiah? Of course there could. It may be as much a future prophecy as it was an imminent one.  Recall that Jeremiah’s prophesy against Egypt was two-fold; pending and End Time. This force from the north as the “flood waters or a torrent” could also include an attack by the Antichrist; i.e. the King of the North (Europe) against the King in the south (Muslim confederation or Caliphate in the south). It is highly unlikely Muslims will accept the Antichrist as their 12 Imam. That is not how the end is written in their “book.”

There is another strong thought about timing. While Nebuchadnezzar was besieging Judean cities (Jerusalem included), history tells us that the Pharaoh of Egypt attacked Gaza. It is likely that this Pharaoh was Pharaoh Necho. He attacked and smote Gaza, either when he came to Carchemish [the battle of] to confront the Assyrians, or when he returned from there, after he had slain King Josiah of Judah who had foolishly aligned with Assyria.

This map shows where Ur is located. It is almost directly east of Israel, thus Philistia/Gaza strip. Ur is the land from where Abraham came. It was identified as the Land of the Chaldeans. Ur is the city, part of what we would see today as Kuwait at the head of the Persian Gulf and outlet of the Tigris and Euphrates Rivers. See Genesis 11:31.
Since the descendants of Philistia (Dirty Arabs) still live in this area it does not fit with the rest of chapter 47. We read that they will be in such a panic they will even leave their children behind [47:3]. This author is not familiar with any other secular or biblical sources saying that this already happened. History seems to tell us that this small portion of land is occupied by a people who historically are perpetual occupants. Egypt in contrast to the Assyrians and later the Babylonians, did not remove a conquered people to other lands or the hinterlands of unoccupied or sparsely occupied territories. Pharaoh Necho would not have removed them.

Jeremiah 47: 6 & 7 make a good case for this being the judgement of God in End Time. He commanded his sword to punish and will not recall it.

(ESV) Ah, sword of the LORD! How long till you are quiet? Put yourself into your scabbard; rest and be still!

How can it be quiet when the LORD has given it a charge? Against Ashkelon and against the seashore he has appointed it.”

Might this include another invasion of this land yet to happen? An invasion that God ordains upon the Hezbollah and anti-Israeli occupants of Gaza; i.e. Ashkelon. God’s judgements continue in chapter 48. Now it is Moab, offspring of Lot through one of his daughters.