Chapter 44: Jeremiah makes his final appeal to his fellow countrymen (a remnant) to abandon their worship of the “queen of heaven” meaning the Ashtoreth dance Pole.

Chapter 45: Baruch, Jeremiah’s scribe, is assured by God that he will have a good life similar to “the plunder of war taken by the victor.” Baruch was faithful and now God rewards him.

Chapter 46: The near and distant future of Egypt. Over 100 years earlier the prophet Isaiah had predicted a similar fate of Egypt…conquered and subjugated by the Assyrians. In C46 it is the Babylonians who attack and defeat the Egyptian “mercenary” army after defeating Assyria.

Chapter 47: The Philistines of Gaza or Philistia are overrun by the Egyptians then the Babylonians overrun them on their way to defeating Egypt. 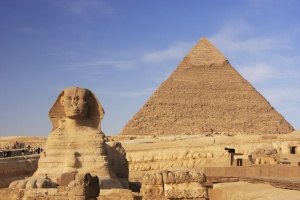 Chapter 48: Moabites. These offspring of Lot occupied the former lands of the Tribe of Gad. They helped Nebuchadnezzar conquer the Kingdom of Judah then in turn, were conquered by Babylonians, their supposed ally.

Chapter 49: This is where we are with this article. It has to do with several territories that fall to Babylon, God’s instrument of judgement. Ammon is another descendant of Lot. For additional information besides what is follows, go to Ezekiel 25:1-11.

Ezekiel 25:43 “Say to the Ammonites, Hear the word of the Lord GOD: Thus says the Lord GOD, Because you said, ‘Aha!’ over my sanctuary when it was *profaned, and over the land of Israel when it was made desolate, and over the house of Judah when they went into exile,”  [*perhaps a futuristic insight to the antichrist’s profaning of the Temple]

Ezekiel 25:4 … therefore behold, I am handing you over to the people of the East for a possession, and they shall set their encampments among you and make their dwellings in your midst. They shall eat your fruit, and they shall drink your milk.

Israel helped the Ammonites by destroying their old enemies, making the later conduct of Ammon even more reprehensible. They frequently fought against Israel during the days of the Judges and during the reigns of Saul and David (2 Samuel 10). In later years they are absorbed by Arabs and became unidentifiable as a distinct people. Which Arabs? This is a later discussion.

Jeremiah 49:1 begins with a question…”has Israel no sons? Why is their land occupied by the Ammonites?” This paraphrase of verse one tells us that God is not pleased with two distinct people; the Tribe of Gad and the Ammonites. Pay close attention to the prophecy found in verse 2 of Jeremiah 49.

[49:2] “The days are coming, declares the LORD, when I will cause the battle cry to be heard against Rabbah of the Ammonites; it shall become a desolate mound, and its villages shall be burned with fire; then Israel shall dispossess those who dispossessed him, says the LORD.”

Did we catch that? Read the final sentence of verse two once again. “Israel will dispossess those who dispossessed him SAYS THE LORD.” Bear in mind that by this time, Judah was captive in Babylon and the Northern Kingdom of Israel was long dispersed by the Assyrians. So what Israel may Jeremiah be referring to per the voice of God? It can be nothing less than End Time prophecy. This land is not currently under the authority or territorial domain of the Israel of today. It is southern Jordan. There is more to happen in our or near distant future.

Of great interest is the history of Rabbah, a significant city of Ammon. Today it is known by the name Amman, Jordan. It is a war between then King David of Israel and the Ammonites but historically and per scripture of significance to him and Bathsheba. 2 Samuel 11:15 tells us this is where Bathsheba’s husband was killed in war; David’s way of ridding himself of the husband of Bathsheba.

One obvious question is “who is Milcom” in verse 2? This is another Ammonite name of their idol god Molech, Moloch… spelling is dependent on the translation one is reading. In short, the name means “a king” god. They referred to their idol as a king, a slander on king of kings. This is not their king himself but their god. Remember that these people descended from Lot, Abraham’s nephew and one he continually had to rescue. Lot sought possession getting him into trouble over and over. His descendants seem to have the same problem.

God through Jeremiah does give recognition to the lineage of the Ammonites. He calls them his faithless daughters in verse 4; the people who trusted in their wealth over God himself. This gives heed to us today. We don’t see or admit wealth is a god but this verse points out that it is precisely that…a god.

Jeremiah 49:6 is reminiscent of chapter 48 and the Moabites. Both the Moabites and Ammonites are part of God’s chosen via Abraham. Verse 6 tells us that in a future time: “But afterward I will restore the fortunes of the Ammonites, declares the LORD.” This has yet to happen in modern history. It is another prophecy or news item for us to keep an eye on.

Jeremiah 49:7 shifts the subject to another descendant of Abraham/Jacob, the Edomite. They descend from Esau the twin brother of Isaac. He was the eldest but not given the birthright of the first born. He sold it to Jacob for a plate of food. Abraham in his blindness blessed Jacob. We can see the deceitfulness of these people all through history. Not God’s will, but actuality. They were and perhaps still are so deceitful many times in scripture deceived themselves.

A rather interesting verse is 49:8 and the reference to them [Ammonites] as Dedan. The Oxford Bible says it well:

“Russia continues to build alliances with Middle Eastern nations. Sudan (Cush) and Iran (Persia) are strong allies. The Muslim nations of Central Asia also are developing ties with Iran, Russia and Turkey. The hatred for Israel by the Middle Eastern Muslim nations continues to boil. It is not too difficult to imagine the nations mentioned in Ezekiel 38:1-7 coming together under Russian leadership to mount a furious attack against Israel, perhaps from Megiddo’s’ oil fields. And who are the nations that object to and oppose Russia per Ezekiel? Exactly the ones we would expect from the present day political situation: the Western Powers as described by TARSHISH and her young lions (cubs).

But there is also an Eastern Power named that objects to the [End Time] Russian Invasion: SHEBA and DEDAN. These were ancient names for the land we know today as Arabia, especially Saudi Arabia, showing that at least some of the Arab states will not favor Russia’s presence in the Middle East.”

What happened to the Edomite people after being scattered by Nebuchadnezzar? They

went south and eventually established what we know today as Saudi-Arabia. Even though Esau was a direct descendant of Abraham through Jacob, he married a daughter of Ishmael; the first born of Abraham through Sarah’s handmaid Hagar. Hagar and Ishmael were not part of the blessing of Abraham or God himself. They knew the truth but went elsewhere. For greater knowledge read Ezekiel 48 as it regards End Time and these same people.

For clarity per Dedan and Sheba, In  Genesis 25 we read that Abraham married Ketur’ah after Sarah died. She has six sons by him. One of them is named Jokshan. Sheba and Dedan are his sons [Genesis 25:3]. This makes Sheba and Dedan grandsons of Abraham. The ancient capital of Saudi-Arabia is Dedan. Does anyone recall “the queen of Sheba?”

It is gruesome reading but God’s judgement on Ammon is specified as to one reason why as described in Amos 1:13. Sit down before going there to read the WHY of God’s judgement upon Ammon.

The Bozrah identified in Jeremiah 49:13 is the same Bozrah mentioned in Isaiah 63:1. It was the capital city of Edom. Bozrah is also significant to End Time and the retreat of Israelis to a desert haven of security; i.e. the mountain caves of Bozrah; i.e. Petra. Jeremiah 49:11-18 describes the totality of the destruction of Edom.

Another aha moment is the fact that Ammon saw wealth as their god. Basrah is a southern port city of Iraq; spelled Bazra. In April of 2017, the Iraqi Parliament recognized 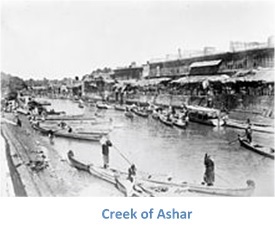 Basra and its oil fields as their economic capital. Money is their god. Go back to Jeremiah 49:4 to better connect this insight.

Perhaps connected and perhaps not, but in Bazra there is a creek named “Ashar” (Tribe of Asher”?). It is a shopping mall or bazar of shopping places accessible by boats. The picture to the right was taken in 1915. Why might this creek’s name be similar to the name of the Tribe of Asher? The Encyclopedia Britannica states that over 4,000 “Jews” lived in Basra in 1911.