There is reasonable consideration or allowance for this final chapter in Jeremiah, although penned by Baruch, was may also have been authored by him, not dictated by Jeremiah. In a sense it is a summary of the previous 51 chapters from prophecies to fulfillments. Bright quotes: “In its present context the chapter (51) seems to say: the divine word both has been fulfilled – and will be fulfilled!” Bright is pointing out that there was both imminent and eminent prophecy in Jeremiah; similar outcomes but two very different time periods. One was a current event and the others are events yet to happen.

Let’s not forget or learn for the first time, the Book of Lamentations, the book following Jeremiah, is also Jeremiahs’ pen. In Lamentations he did not lament the Babylonian captivity as much as his fellow countrymen not heading his warnings.  We will only point out a few incidents in this chapter that should be reviewed per chapter 52 since it does summarize the previous 51 chapters. We encourage the reader to take it upon her or his-self to read the Book of lamentation to add depth of personal understanding.

Jeremiah 34 to 36 describes the situation in Judah before the fall. Chapter 37 to 39 describe the time of the fall of the kingdom of Judah. Chapter 40 to 45 describes the fulfillment of the prophecy and fall of Judah; a fall that remains contested to this date. This will only change upon the second advent of Jesus when he returns to earth as King of kings in Jerusalem. C40 to 45 is consequential to the fall but chapters 46 to 51 describe an End Time element that includes the judgment of not only the world opposed to Israel but judgement awaiting the unbelieving Gentiles and Israelites.

If we back up to Jeremiah 30 to 33 we find the “hope of a future” Jerusalem. Let’s review some of the major players in Jeremiah. One of them is a person named Shaphan; Biblical account. When the chief Temple priest Hilkiah discovers an ancient Torah scroll, he gives it to the scribe Shaphan, who in turn brings in to King Josiah. Josiah reads it aloud to a crowd in Jerusalem, resulting in a great religious revival. Josiah was the last good king of Judah. 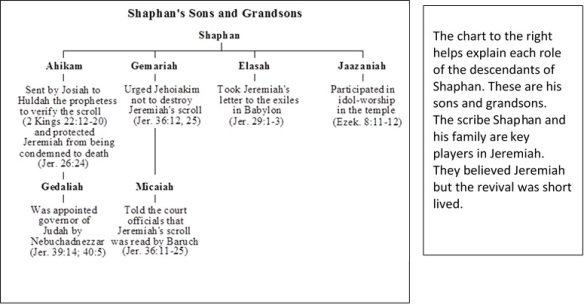 The chronology of rulers on the throne in Jerusalem during the time of Jeremiah: 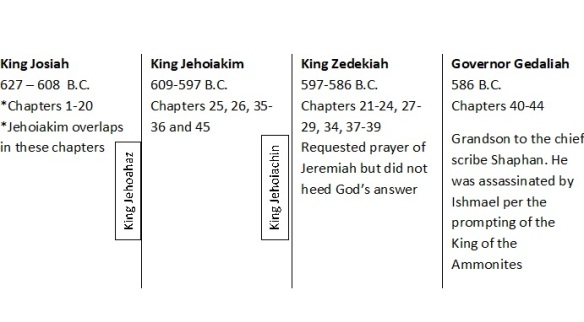 JIV NOTE: I did not include Kings Jehoahaz or Jehoiachin (Jeconiah) in the above chart. Jehoahaz was almost immediately replaced by Pharaoh Necho upon defeating Judah and King Josiah at Megiddo (he was 3 months on the throne). Jehoiachin only ruled 3 months 10 days. He followed his father Jehoiakim to the throne but was removed by Nebuchadnezzar almost upon his taking the throne. A fascinating and historical connection or ahamoment is found in 1 Chronicles.  It states that Jeconiah (Jehoiachin) is the father of Pedaiah. That in and of itself means little, but Pedaiah was the father of Zerubbabel.  It was Zerubbabel along with Ezra who lead the first Judeans out of captivity in Babylon back to Judah. He also set the foundations for the second temple according to Ezra 5:2.

Chapters 30 – 33 are considered chapters of consolation and not easily identified as being written of prophesied during the era of any of the particular kings identified in Jeremiah. They are promises of a future reunited Israel; the people and twelve Tribes of Israel/Jacob. These chapters could have been revealed to Jeremiah at any time during his years. They assured him and his fellow countrymen of a true Promised Land guaranteed under the signature and promise of God him-self.
The same is true of chapters 44-46. These passages are judgement passages that cover two distinct prophetic time periods; one that is during the life of Jeremiah/Baruch and one that is End Time. They include both the destinies of Israel and all Gentile nations.

There are actually two different 70 year judgements running parallel to each other in Jeremiah. It was 70 years between the first exiles of Judeans (includes Jehoiachin; aka Jeconiah or Coniah) and their release by Darius the Mede [605 to 536 B.C.]. The other 70 years is between the time Nebuchadnezzar totally destroyed the Temple and when the Temple was completed a second time [586 – 515 B.C.] We usually only here of the 70 year Babylonian activity but there was parallel judgement periods. One for the Tribe of Judah and one for the Temple.

Lamentation, also written by Jeremiah, was penned sometime after 586 B.C. The year 586 B.C. was when the third and final deportation of Jews (Tribe of Judah) occurred.

The following may help a bible student better grasp the events and dates. 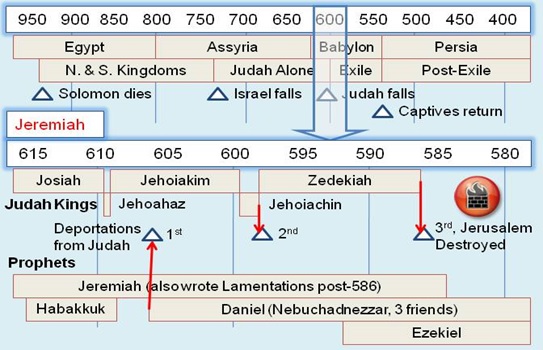 The above chart was created by biblequestions.org