We begin part b with terminology. Jeremiah 51:26 states, [ESV] “no stone shall be taken from you (Babylon) for a corner” (stone). It was so crushed, burned and destroyed once that it had no stone worthy of using later in building. In End Time this will also be true. There will be but one foundation stone; Jesus Christ. No idols to worship. Nothing will be worthy other than “Worthy is the one who was slain.”

The Jewish Targum sees this stone (above) as meaning “no future king or ruler will come from Babylon.” The Targum is also identified as the Tanakh.

Verse 28 is the actuality of THAT TIME; not a future event. But in verse 29, it will be an End Time land desolate and without inhabitants. This has not yet occurred. The End Time slaughter of humans will take place during the 7 year Tribulation. The anti-Christ will decimate the world’s population under orders from Satan himself. Manmade nuclear weapons will help accomplish God’s will. After the fall to the Medes and Persians of Beltshazzar’s Babylon, other historical and following invaders included Achaemenes, Greek, Seleucid, Parthian, Roman, and Sassanid empires. Keep in mind that the Babylonians and the original [Abraham’s] Chaldeans are basically the same peoples between the upper and lower Mesopotamian valley. 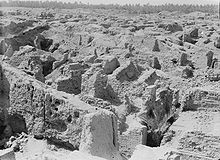 To the left is a picture of the former great city-state of Babylon as seen in 1932. Itb. was twice a known primer world power; once under Hammurabi, 1800’s B.C. and again 1,200 years later under Nebuchadnezzar. Hammurabi is famous for codifying laws that the world often defers to today.

Somehow we must justify the next few verses. The bible and historians tell us the Babylon and King Beltshazzar were taken by total surprise and no battle ever recorded. So we must ask…how does verses 30 – 32 make parallel sense? Answer: One prophecy but two different times in history. One already competed without a battle and another in End Time when Babylon is symbolic of the rule and domain of anti-Christ.

Verse 34 of Jeremiah 51 is describing Jerusalem. Nebuchadnezzar totally emptied her of building and human, burning it to the ground. Again in verse 37 we are told it will be a desolate land of jackals. The “SEA” mentioned in verse 42 is a sea of militants overrunning that land. These armies will overflow covering the entire land of Babylon. This too could be a reference to End Time and the gathering of a 200,000,000 million man army that will eventually fight Jesus at the splitting of the Mt of Olives.

Jeremiah 51:46 again defines what Revelation tells us about End Time. Ruler against ruler; kingdom against kingdom; nation against nation; rumors and wars of actuality. Why do we conclude this? Read verse 48, 49 (ESV)…

Jer 51:48  “Then the heavens and the earth, and all that is in them, shall sing for joy over Babylon, for the destroyers shall come against them out of the north, declares the LORD. 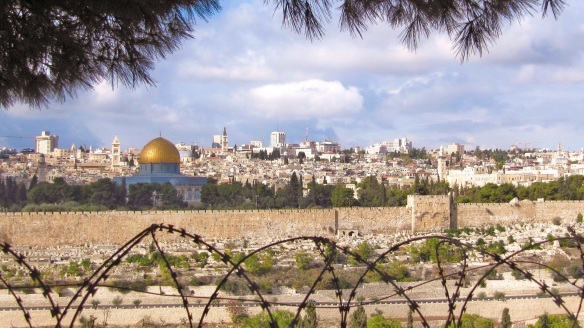 Jeremiah 51:50 to me is one of those verses that have such personal meaning. “Remember the Lord from far away, and let Jerusalem come to mind.” Now that President Trump has officially declared recognition of Jerusalem as past, present and future capital of Israel, it all fits into God’s plans for his son’s millennial reign; Jesus Christ. That means everything to this author. The original legislation to relocate the U.S> Embassy to Jerusalem was under President Clinton in 1996.

Verse 51 continues this author’s feelings per verse 50. Many foreigners have come into the land of promise and decimated her. Jeremiah in this verse is also very personal per his feelings; he includes in his comments all of those who descended from Jacob. It is him referencing the shame of his people both Judeans and the rest of Israel’s Ten Lost Tribes. For the destroyers of city-state Babylon and symbolic Babylon of the anti-Christ will be torn asunder; “destroyers come from me says the Lord.” What a promise as we watch the daily news and see these things falling into place. Having difficulty seeing how these prophecies are falling into place? 2 Timothy 2:15… [NIV] “Do your best to present yourself to God as one approved, a worker who does not need to be ashamed and who correctly handles the word of truth.”

We continue to read and add to our confidence in the God we trust… (51:56; ESV) “for the Lord is a God of recompense; he will surely repay.” To give confidence in the God we trust to those taken captive to Babylon, Jeremiah instructed Seraiah (a man servant) to carry this assurance to Babylon and he is told to read it to his fellow countrymen. Problem?

YUP! 70 years later when released from further Babylonian captivity as promised by God himself, most of the Judeans had become successful in the Mesopotamia, Chaldean, Babylonian territories and did not want to leave it all behind. Today’s Christian-claiming church pew dweller could learn from this verse if s/he studied rather than simply read it.

What a reflection on us today. Do we want to leave the security of our current homes, jobs, friends, reputations, habits, or even our home church to stand out in the crowd as Romans 12:1 tells us: “Do not be conformed to this world, but be renewed in mind and spirit…” There is nothing in this verse found in Romans to leave this world to some isolated commune or community. It simple is a priority commandment. God first! Not!!!! God in the center of our daily living? Now we get it.