Moab? Ammon? Edom? There are many names and terms in chapter 48 of Jeremiah that most will simply read through or past them. This article will discuss the chapter but also define some of the terms to help with knowledge and potential understanding.

Let’s begin with a map of this time in Jeremiah. We can see Moab’s geographical location. 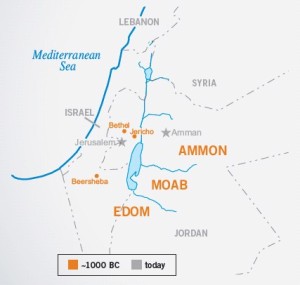 It is between Edom and Ammon. Today this is mostly Jordan. To the north is war-torn Syria; a true source of potential war that could spread with powerful weapons of mass destruction in their hands. This may very easily fit into God’s final judgement plans. The orange indicates the map as it stood in 1000 B.C. The gray is how it politically and geographically lines up today (2017 A.D.).

Jeremiah 48:1 “Woe unto Nebo” This is a Babylonian deity. It is also a mountain in Moab, southern Jordan. It is also the Mount upon which Moses stood in order to view the Promised Land. Moses saw the lands but never entered it.

Jeremiah 48:1 “Misgab is confounded” This is a term for ‘a high place.’ It was a Moab fortress. Odd as it may seem, perhaps a curiosity… it is only mentioned one time in scripture.

Jeremiah 48:2 “in Heshbon” Mistakenly many would take this word for the name of a person, place or thing. It is and isn’t these. It means “contrived intelligence.” It is also a destroyed village on the east side of the Jordan. It is here where [ESV; verse 2a] Moab is no more. In Heshbon they planned disaster against her.

Jeremiah 48:2 “Madmen?” The people here may have been ‘mad’ but in this incident it is a location in north-west Moab of old. It has several meanings; “dung hill” is one of them. It was once a city located between the boundaries of the Tribes of Gad and Reuben east of the Jordan River.

Jeremiah 48:3 “Horoniam” This is a Moabite ‘double cave town.’ Obviously it is located in a mountain; thus the cave implication. Today it is an unidentified place in southern Moab (Jordan). 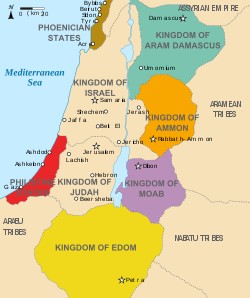 It would be safe by now to understand that this very descriptive chapter in Jeremiah is location specific. In short, it is a complete destruction. Moab, a tribe descended from Lot and his daughter, and per other verses in chapter 48, is important to God-Jehovah. In verse 42 it explains that they magnified themselves above the Lord (ESV). Not unusual but a sin against God. It is a sin for which there is a cost and God is judge; the only judge. The existence of the Kingdom of Moab is attested to by numerous archaeological findings, most notably the Mesha Stele, which describes a Moabite victory over an unnamed son of King Omri of the northern ten Tribes of Israel. This area today is within the Kingdom of Jordan.

Originally the territory of ancient Moab was dominated by a race of giants known as the Emim. At the time when Moses came to the area with the children of Israel Moab was an area that ranged from the brook Zered on the South, and the river Arnon on the North. During the period of Old Testament history there were numerous cities within this region, and we know this from the Scriptures and also from the famous Moabite stone. The cities mentioned were Dibon, Nebo, Beth-diblaim, Kerioth, and Zoar [Bible History Online].

Unless one has happened upon the scripture or the secular history of this, most do not realize that Moab helped Nebuchadnezzar in his conquering of other nations; particularly the Kingdom of Judah. After their help, he turned on them, conquering and removing them as a people in this land.

According to the New World Encyclopedia, records of the Moabites, if not the people themselves, disappeared after or around the time of the return of a remnant of Judeans from their 70 year captivity in Babylon. Up to the time of King David, the Moabites were a constant thorn in the side of nation of Israel defeating them at times of war. This is especially true during the time of the judges when an Israeli Confederacy existed. Israel was then ruled by judges but lived within their own tribal territories. Each man did as he saw was right back then [Judges 21:25; Judges 17:6].

Jeremiah 48:46 and 47 are significant verses of prophecy. We are told in Numbers 21:29 and again in 2 Kings 3:27 that the god of the Moabites was named Chemosh. During the end and downfall years of King Solomon, he too erected a “high-place to Chemosh” to satisfy the whim of one of his many foreign wives. We find this in 1 Kings 11:7 & 8. It wasn’t until the last good king of Judah, Josiah, that this “high-place” and other gods of enemies inside Judean lands were destroyed. This we read in 2 Kings 23:1-37.

The final three verses say much about the prophetic destinies of Moab. Plural word, destinies, because the prophecy is two if not three-fold.

[V45] “A fire will come out of Heshbon. It will destroy [devour] the corner of Moab, burn the hair on the heads of its occupants.” We should note that the word devour in the Hebrew in this verse is ‘âkal. It means more than to burn like one would expect from a fire. It also means “to eat away at.” Just like a cancer from nuclear fallout.

JIV NOTE: This has the tinge of a future nuclear explosion that casts its radiation a great distance. One of the consequences of radiation is the losing of hair.

[V46] Their sons and daughters will be taken captive and the “people of Chemosh [their idol-god] shall perish.” This is recorded as having happened when Nebuchadnezzar overran these once furious people of war. As we have mentioned before, this is a routine of both the Assyrians of old and the Babylonians; i.e. to remove them from their homelands.

[V47] There is a distant sounding prophecy of God promising to return these relatives of the Israelites through Abraham’s nephew Lot…[KJV] ”Yet I will bring again the captivity of Moab in the latter days.”  The final sentences says the “thus far is the judgment of Moab.” Thus far; what does this mean? It means this will do it for now but there is more coming in End Time be it reprieve or final judgement.

2 Corinthians 5:10  “For we must all appear before the judgment seat of Christ, so that each one may receive what is due for what he has done in the body, whether good or evil.”

Who is next? Jeremiah 49 tells us about the other daughter of Lot and her descendants; the Ammonites. Has anyone noticed that Jeremiah has shifted away from the judgements of Judah to those of its neighbors? It is Nebuchadnezzar causing all of this havoc. This is why he is also identified several times in Jeremiah, even though evil, as “the servant of God” [Jeremiah 25:9; 27:6; 43:10].

JIV NOTE: In his own ignorance he is carrying out the will of God-Jehovah. It is not the will of the god of Babylon. That would be Baal, but he or it is only made of inanimate material. “The servant of God” translates as “an instrument of God” as through him we find Daniel interpreting Neb’s dreams. Through that we get a glimpse into a prophetic future that is very comprehensive and accurate. We also get a shirt-tail introduction to Revelation.