Editor’s Note: We are posting chapter 10 of Jeremiah ahead of earlier chapters for two reasons. One is that Jeremiah in and of itself is not written in a chronological order. Second and most importantly is opportunity. We have just past the Christmas season and Jeremiah 10 is sometimes used as an anti-Christmas tree chapter. We want to explain the fallacy of such nonsense.

This is the passage from which some so-called bible scholars claim that a Christmas tree in the home is significantly similar to a wooden idol. Specifically these men and women quote Jeremiah 10:3, 4 as their supporting bible evidence.

Jer 10:3  “Their [see v2] religion is worthless! They chop down a tree, carve the wood into an idol, [v4] cover it with silver and gold, and then nail it down so it won’t fall over.”

“Chop down a tree? Cover it with silver and gold? Nail it down so it won’t fall over..?

This is a good example of OUT OF CONTEXT, highly spiritualized conclusion, and a slight of words. Every scripture must be taken within context. Verse 1 specifically calls to the attention of Israel to not be like their neighbors. Let’s take a quick look at the argument that Christmas trees are somehow included in this passage. 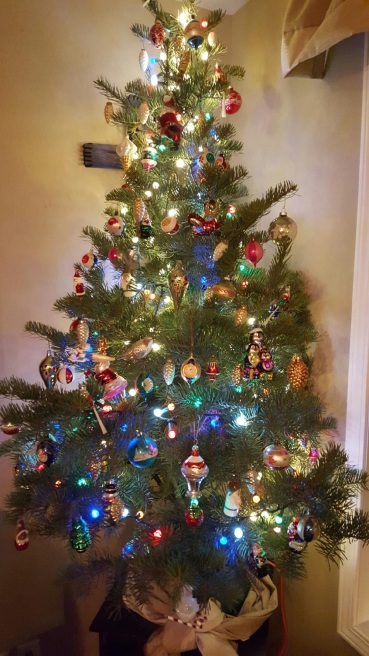 If we put anything, yes, ANYTHING before God, it is called a god or idol in His eyesight. Most Christians have no problem separating a fictional Santa, Elves, and a form of decoration from the celebrated birthdate of Jesus. Fact is, He wasn’t even born on this date.

To chop down a tree… This in and of itself has no connection with the content and intent of this passage through the eyes of Jeremiah and many other prophets who discuss the wrongs of idol worship. The Ark of the Covenant was made from Acacia wood the covered with silver and bronze [Exodus 35:24]; massive amounts of cedar wood was imported from Tyre to construct Solomon’s Temple and parts covered with gold (1 Kings 6:19-21);

One researcher has noted, “This wood [acacia] is resistant to decay because the tree deposits in the heartwood many waste substances which are preservatives and render the wood unpalatable to insects making the wood dense and difficult to be penetrated by water and other decay agents.” (Source: http://ww2.odu.edu/~lmusselm/plant/bible/acacia.php)

In one sense this would make for the ideal wood from which to make a longer lasting idol. It is resistant to rot, insects, strong and long-lasting. Much of the acacia, cedar, and juniper wood used to build the Temple and the Ark of the Covenant was covered with silver and gold. Did the priests of Israel bring Israelis to the wood, stone and jeweled Temple to worship the building itself? There is no scripture to support such a thought yet alone make it a supposition.

Cover it with silver and gold… We have already discussed the extensive use of silver, bronze, and gold in the building of the Temple and the Ark of the Covenant. Putting silver tinsel and shinning ornaments on a Christmas tree is the same as a person wearing decorative jewelry. That does not make it or them an idol. Ezekiel, Proverbs, 1 Peter, Job, 1 Corinthians, Zechariah, Psalms, Matthew, Lamentation (another book written by Jeremiah) all discuss gold and its use.

Nail it down so it won’t fall over… How else does one keep a piece of wood standing upright? The last house I built was nailed and bolted to the ground, concrete, and wood framing. This does not make it an idol as described in Jeremiah 10:2 & 3. Even if one stands around the Christmas tree and sings the song “Oh Christmas tree” does not make it an idol. Only when and if that replaces God in one’s heart as an item of their affection and is first in their heart does it border becoming a Christmas idol and a worship song. Even if we “nail it down” in some sort of a tree stand in our house, what do we do after the season is over? Throw it out!!!! Who throws out an idol of worship?

We must ask here, where in the bible does God or Jesus say to set aside ONE DAY a year to celebrate his birthday? There is no such passage. We are to celebrate Him every day, in every way, with all of our might [Psalms 100:1, John 4:24, Matthew 22:37]. This is not to suggest that a given day of SPECIAL HONOR is wrong. What is wrong is limiting it to this one time a year.

Now, for the rest of the history and future prophecies found in Jeremiah 10…

V6 & 7 proclaims the greatness of God. This is in contrast with the idols the people of Judah is now guilty of worshiping. Idols are made by man, carried by man, taken care of by man, put in place by man, and they do not listen or speak. As Jeremiah describes it in verse 5… “They are like scarecrows in a cucumber field.” This passage is not understood by many as it is two-fold. The scarecrow part is obvious. This is the scary thing that flops according to the wind and keeps out the birds of opportunity. But, why did Jeremiah use the cucumber as the vegetable of choice? This is symbolic of fools who prostrate before the scarecrow; cucumbers bowing before a scarecrow; the cucumber represents the people of Judah; any who bow before a worthless manmade thing.

We have stated it before in our studies of Daniel and Revelation. Today’s church is too often similar. People celebrate the catchy song and lyrics; the dancing around in the building; self-emulation; the experience more than the worship; the beverage spill on the vestibule floor is of greater concern than is the soul of their neighbor; getting out of church on time; political correctness over truth; making god to their liking instead of fearing God who created them giving them life and breath.

The Coffman Commentary on Jeremiah 10 is simple and a good overview of Jeremiah 10 siply put in one sentence. “The true God contrasted with idols.” We could leave it at that if we didn’t need to have Jeremiah’s words from 2600 years ago explained. So we continue…

Jeremiah 10:11 is a mystery or enigma, not in its message but in how it is written. This is the one verse in the Book of Jeremiah written in Aramaic. This verse stands alone as a “one-verse paragraph” in the Masoretic text. True and well-intending bible scholars have debated the reason for this for years. This website will only add a thought. We call it JIV: Jim’s Introspective View. We report; you decide.

Sometimes in a given language it is difficult to express one’s point using their native tongue. In English we often hear the phrase “Quid Pro Quo.” Why? The English version of the message being conveyed would be much longer explaining what is meant by using this Latin term. It is a great pre-verse 12 statement and exenterates the radical and necessary reason for removing idols (disembowel the home of idols). These “things” did not create the world as we know it. Only God created all things. Even the idols themselves are made from things God created back in Genesis. Verse 11 and 12 are opposites but the Aramaic in in Jeremiah 10:11 helps to contrast Jeremiah 10:12. It may also be in Aramaic as it is a message to the world. Just as Daniel is written first half in Aramaic and second half in Hebrew; the intended audiences are different. 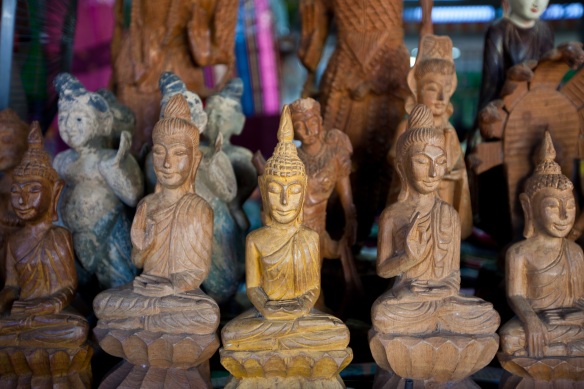 The CEV translation says in 10:14… People who make idols are so stupid! They will be disappointed, because their false gods are not alive. Other translations are just as brutal in translating verse 14. How can one believe that something s/he makes is somehow better or superior to the one who makes it? In a sense and if it is true, the Amish build fabulous furniture. No question here. However, they deliberately build a flaw into every piece. Why? No one is perfect but God. The sad irony or insincerity is… the Amish think they must include a man made flaw in their furniture. This means they must be under the false impression that they are capable of building something to such perfection it is greater or equal to what God creates.

Verse 17 begins a new paragraph but not a new chapter. Jeremiah is changing thoughts at this point. He is telling those inhabitants of Judah, mostly Jews but also some from other Tribes of Israel, to prepare to be moved… “…gather up your things as you are surrounded” and about to be take into your 70 year captivity in Babylon. In a very real way, the rest of chapter 10 is not only describing the fate of Judah but of all Israel. Below is the rest of chapter 10. Read it with the idea that there is more than just Judah being described. It speaks in the past-tense yet Judah has not yet been overrun by the Babylonians.

Jer 10:19  The people answered, “We are wounded and doomed to die. Why did we say we could stand the pain?

Jer 10:20  Our homes are destroyed; our children are dead. No one is left to help us find shelter.”

Jer 10:21  But I told them, “Our leaders were stupid failures, because they refused to listen to the LORD. And so we’ve been scattered like sheep.

Jer 10:22  “Sounds of destruction rumble from the north like distant thunder. Soon our towns will be ruins where jackals live.”

Jer 10:25  Our enemies refuse to admit that you are God or to worship you. They have wiped out our people and left our nation lying in ruins. So get angry and sweep them away!

The past tense is the tell-tale sign that not only is this passage a change in thoughts, therefore a new paragraph, but a twofold prophetic application; i.e. a now and a future application. This is Jeremiah once again prophesying into a history that has yet to be fulfilled. This is also End Time prophecy per the Great Tribulation; Jacobs Trouble [Jeremiah 30:7].

Verse 25 is worthy of a short additional thought. “Our enemies refuse to admit you are God…” How ironic that those in Judah at this time are guilty of the same thing. We know this from reading the first few verses in Jeremiah 10 and the very first chapters already posted in this website. They meaning all of Judah to the person are GUILTY [Jeremiah 4:21]. This is what kindled God’s anger against his chosen people Israel. First it was the Northern Kingdom of Israel and now the southern Kingdom of Judah. In the coming End Time it will be global (anti-Christ).

“They have wiped out our people and left the nation in ruins.” [CEV; v25]. The ERV is more inclusive in this verse. It is the reason we encourage readers to use more than one translation and commentary in his or her bible studies. The English Standard Version puts verse 25 this way:

Jeremiah is not speaking to the yet-to-be-captive people of Judah in verse 25, but to the world of haters or rejecters of God and anti-Semitists. Daniel and Revelation deal with this as will Jeremiah in later
chapters. We are headed that way in this study. An added thought to help one’s personal studies. Verse 25 is a reason to not take one translation as a stand-alone study bible. The CEV d

oes not include the phrase “and upon the families that call not on thy name.” The phrase “and families” is better explained in Zechariah 14.