Mark 16:7 can be read, overlooked, folded into the rest of this historical fact or be a bewilderment. Easter Sunday 2015 this passage jumped out at me. I waited for the pastor to address this curious comment that opens verse 7, but he didn’t. My option was simple but not easily done. Dig it out for myself.

Here is what Mark 16:7 says (NIV) But go, tell his disciples and Peter, ‘He is going ahead of you into Galilee. There you will see him, just as he told you.

Hmmm? Tell his disciples AND Peter?? The last contact Peter had with Jesus and as recorded within the Holy Scriptures (Bible) was when he was with him in the Garden of Gethsemane then followed him from afar off. That very evening Peter denied three times that he even knew this person now in the hands of authorities.

Think about this. You or I suddenly find our best friend in the hands of authorities for crimes against society. The mobs are loud and many are hanging around the courtyard. Then, people start pointing to either of us trying to tie us with the “friend” who is in custody. How would you react if you suspect knowing him yet alone being a close associate of his will also incriminate you? Peter was in this position. Now assume that the incriminated “friend” was somehow released. Would you be even slightly surprised if this “friend” looked at you the same as previously? How would you feel knowing that you had recently denied any association with this person at the time of his or her arrest? 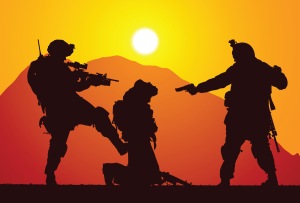 Let’s get very contemporary. You are hiking across the war-torn ISIS territory. You and a Christian friend are suddenly surrounded by obviously armed Jihadists and radicals. They ask one question of your friend; “Are you Christian?” Your friend says “YES” and they shoot or behead him on the spot. Then their attention turns to you. Having witnessed this atrocity they begin by asking you or me the same question, but the friend is no longer there; you or I are alone…”Are you Christian” they demand? Might we even hide behind a false fact that we met this guy somewhere while hiking but don’t really know the guy? Perhaps we might simply deny knowing him.

This is similar to the position in which Peter finds himself. It excuses nothing but highly suggests you or I severed our relationship with this arrested person. In the recorded historical fact of Jesus Christ’s crucifixion, Peter had verbally severed his relationship with Jesus by denying he even knew him.

Now it is after the fact. Jesus was buried and the disciples were cowering trying to decide what to do now… perhaps distance themselves from this crucified person and go back to fishing? But, this article is about Peter and why Jesus, after his resurrection and as recorded here in the Book of Mark, tells these women to go and tell the disciples AND Peter.

I could easily get lost in other facts as recorded in Matthew 28:1-15, the Roman guards saw the events of the resurrection earthquake (v2), the angel appearing (v2) the bribing of the guards by the Jewish leadership (12), and the fact that they were told to tell the authorities if questioned that Jesus’ disciples came and stole his body in the night while they slept. [BIG PROBLEM] Roman guards who fall asleep while on duty is punishable by death. Josh McDowell’s book Evidence That Demands A Verdict we learn the following from McDowell’s many and varied sources…

The guard numbered from ten to thirty men……they were not the kind of men to jeopardize their Roman necks by sleeping on their post…they were Roman soldiers, not mere Jewish temple guards…The soldiers had very strict discipline…the punishment for deserting one’s post was death…the fear of punishments produced faultless attention to duty, especially in the night watches…refusing to protect an officer was punishable by death…one soldier who had fallen asleep on duty was executed by being hurled from the cliff of the Capitolium… (pp 218 – 224)

If the guards were in fact asleep, how would they know that it wasn’t the local peoples who came and stole Christ’s body from the grave; they were asleep. Right? The same is true even if it was one guard at the grave-site.

Why didn’t the Lord single out any of the other disciples such as the doubter Thomas? Why? Because Peter was guilty of a sin that was so serious that he certainly figured he was no longer in good standing with the Lord, or even considered a follower of Jesus upon which his salvation hung in the balance.

To answer this question and what many ask ourselves even today, let me direct you to Matthew 12:31: “every kind of sin and slander can be forgiven (when confessed), but blasphemy against the Holy Spirit will NOT be forgiven” [emphasis mine]. But don’t stop at verse 31. It gets even more comforting when we read the next couple of verse:

This is precisely the situation Peter finds himself. He denied the “son of man Jesus” three times. Verse 32 tells us such a sin can and will be forgive (if confessed; also see Mark 3:28; Luke 12:10; emphasis mine) Even Judas could have been forgiven if he confessed his betrayal of Jesus. Jesus separated out Peter to assure him he was still well within the grace of God. As Jesus told so many that he healed…go and sin no more.