Skip to primary content
Skip to secondary content
I couldn’t help myself.
The following is more of a blog than a message. A message would be more fully developed.

In reading some of the e-mails from those who follow ahabiblemoments, it occurs to me that there are too many “soft” Christian points of view; i.e. politically correct but spiritually wrong.Our culture has compromised, many fundamentally and well-intending churches and pastors pull their heads back into their proverbial turtle shells, apologize for, run the risk of being branded as “radical” and/or fear giving the “government” cause to revoke our tax-exempt status. When Jesus Christ said they will hate you because they first hated me, it is because HE too called sin, for what was and is – SIN. Jesus was not concerned about being politically correct. It was the message more than the messenger that the world and governing bodies hated. However, the messenger in the Bible, Jesus, paid the price. (You may want to think about “paid the price” a little as it has a double meaning here)Barnes’ Notes on the Bible commentary states: “If the world hates you – The friendship of the world they were not to expect, but they were not to be deterred from their work by its hatred. They had seen the example of Jesus. No opposition of the proud, the wealthy, the learned, or the men of power, no persecution or gibe, had deterred him from his work”.
(GIBE means “a comment that is intended to hurt or provoke”)

Clark’s Commentary on the Bible puts it in words I particularly like… “As the followers of Christ were to be exposed to the hatred of the world, it was no small consolation to them to know that their hatred would be only in proportion to their faith and holiness; and that, consequently, instead of being troubled at the prospect of persecution, they should rejoice, because that should always be a proof to them that they were on the very path in which Jesus himself had trod”. Don’t misread this passage commentary as meaning, in order to be recognized as a follower of Christ we MUST FIRST be at odds with individuals in this world. That is the cart leading the horse. (more on this in a different article)Re-read the middle part of Clark’s Commentary on this topic… “their [the world’s] hatred would be only in proportion to their faith and holiness…”. This does not mean to become obstinate or draw attention to one’s self. It also does not mean to hide or compromise one’s faith or the teachings of Christ. The hatred of the world is to the message a Christian delivers but be prepared to be picked out as the radical in the line-up.The Apostle Paul points out in Ephesians 5:2 that we are ‘to walk in love’, not antagonism. But, in Matthew 5:14 we are also identified as “the light of the world”. It should be a simple deduction that light exposes the “dark corners”. Read the rest of this passage starting at verse 14… 14 “You are the light of the world. A town built on a hill cannot be hidden. 15 Neither do people light a lamp and put it under a bowl. Instead they put it on its stand, and it gives light to everyone in the house. 16 In the same way, let your light shine before others, that they may see your good deeds and glorify your Father in heaven.

Notice that the emphasis in Matthew 5:16 is to let our light shine before others that THEY MAY SEE GOOD DEEDS. Note: Maybe the Book of James and its author is onto something in that Epistle; works = good deeds and should be noticed? There is nothing in this passage to suggest it means to get into arguments, be a spectacle, revolutionary, behead those who do not believe, pick fights, knock on neighborhood doors in order to earn one’s salvation via a good heated discussion with the home owners, unbeliever or someone of another faith, etc. What it does emphasize is being a light with our good deeds. But here we go again, there is nothing here that supports compromising our faith, beliefs or hiding our faith in the proverbial turtle shell. I like how Rev. Greg Du Bois of the First Covenant Church in Cadillac, Michigan put it in one of his messages: “a belief is what you hold, but a conviction is what holds you” (author unknown) 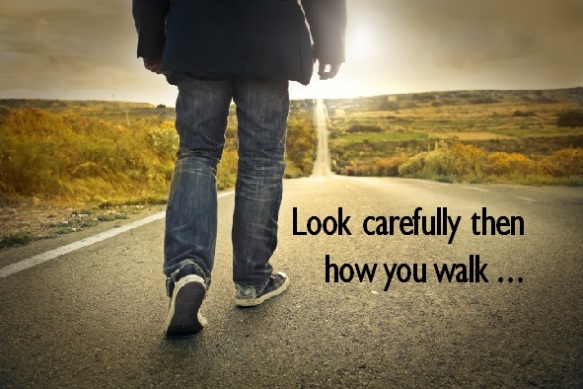 Once again, as a reminder to each of us, John 3:21 …”Everyone who practices wickedness hates the light and does not come to the light, so that his actions may not be exposed”. Ephesians 5:15, 16, 17 (ESV) “Look carefully then how you walk, not as unwise but as wise, V16 making the best use of the time, because the days are evil. V17 Therefore do not be foolish, but understand what the will of the Lord is. Note in verse 17 it also tells us to not be foolish”. You judge what that means to you, but it means to me to be wise, not stupid or foolish in our actions, words or deeds; e.g. what we say and do.Does anyone reading this website “blog” really think that Jesus is trying to be politically correct in Ephesians 5:5? Look up the verse for yourself or click on the highlighted verse address. He is being very candid. Candid means frank, blunt, upfront and not hiding in one’s turtle shell. Jesus is not trying to be politically correct. Why point out the definition of this word? It isn’t to insult my readers, but it is to confess the excuse I used in the past. I claimed I really didn’t fully understand the meaning of the word “candid”. I deliberately took it to mean ”be candid while maintaining political correctness.” Lame… you bet it is! However, it worked for me until God worked on my heart and we had a face-to-face moment.Here is part of my “old” practice and a confession to my readers. For those who buy the humanist schooling philosophy … ‘human beings are naturally good’, read Romans 7:18-19. For those who harbor any animosity or anger toward another, read Mark 11:23-25. Underline verse 11:24 in your Bible. For those who wonder from where the statement came, “s/he is on the left or s/he is on the right”, read Ecclesiastes 10:2 in multiple translations but do it before casting your vote in our pending national elections this November.
Conclusion and how I tie this “blog” in with the opening paragraphs of this article. You will either hate or appreciate me, but not because of the messenger-author. It will be because of the messages. They all come from the Holy Word of God. Don’t simply take my word for it. I am but a human. Re-read the Word of God yourself and *do as it SAYS and as Jesus DID. You as a Christian are to be the light of the world and light up the room showing your good deeds but a light also exposes the evil even when it is not politically correct. Quit playing by the rules of deception that we have been gradually fed by the “world” and to a great part, accept life and the evils of this world as ‘this is just the way it is’.*So much for the old adage and advice we as Christians have also bought into. ”Do as I say, not as I do”. As Christians we are to do as God’s Word says and live as Jesus Christ did and said. Your eternity depends on it. So does mine. Denial does not excuse anyone. Besides, isn’t Denial [the Nile] a river somewhere in Egypt?I just couldn’t help myself. It has to be said and be made known to fellow believers. Are you on the right or the left?