“In those days and in that time, declares the LORD, the people of Israel and the people of Judah shall come together, weeping as they come, and they shall seek the LORD their God. They will seek directions to Zion.” (ESV)

This passage found in the 4th verse of Jeremiah 50 makes it clear that Jeremiah is no longer speaking of the imminent future but a far distant yet eminent or prominent future. It is one that is a conclusive impact upon mankind and all of God’s creation. How do we know that? Jeremiah is speaking of a time when all twelve Tribes of Israel will once again come together; “the people of Israel and the people of Judah shall come together.”

This gives us a setting and time for the rest of this chapter. The desolation of Babylon, figuratively that might be a location or symbolic of another place God calls (like) Babylon; for a nation or group of people out of the north will come up against her. Both man and beast will flee away. This must be a massive intrusion or invasion if even beasts of the wild and domesticated will flee. End Time will exceed even the wildest of anyone’s imagination or perception if only God himself knows the time.

The Hebrew for “nation” (v4) means a race or a people; non-Jewish peoples; Gentiles.” It 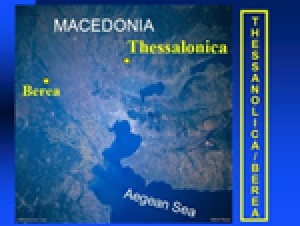 is a bit of fascination to look at the word “north” in V3, for out of the north… The Hebrew here is Boreas…a north, north east wind. It is very close in spelling to the city the Apostle Paul visited in the New Testament; Berea. Today Boreas is a stronghold of ISIS and is called Aleppo. There is also a military outpost in another Berea near Macedonia, Greece. If we take Thayer or Strong for their translation(s), NNE would be the Boreas/ Aleppo. The map here shows, Berea, Greece/Macedonian would be NNW of Babylon.

Insight: this is from where the Bereans get their denominational name. According the the Wikipedia…In ancient times, the Bereans were the inabitants of the city of Berea, also known in the Bible as Beroea. [Acts 17:11]

Jeremiah 50:6 is something anyone who has followed this website has read many times before. There are a huge number of descendants of the twelve Tribes of ISRAEL who simply have forgotten or lost their DNA connection to their Hebrew roots. It read in 6b…They have forgotten their fold.” They do not connect the dots back to their original fold or roots of Israel. Even the one reading this article has a probably chance of being connected by DNA, like it or not.

Verse 50:7 needs a bit of explanation.

“All who found them (offspring of the lost tribes) have devoured them, and their enemies have said, ‘We are not guilty, for they have sinned against the LORD, their habitation of righteousness, the LORD, the hope of their fathers.’

We are not guilty because…! Out of the bible we find the excuse the Muslims and most Arabs, past and present, use to justify pushing today’s Israel into the sea and eliminating them from the face of the earth. It is too obvious to look in the mirror and see that members of Israel are not the only ones who have “sinned against the Lord.” For all have sinned and come short of the Glory of God [Romans 3:23].

Might the he-goat or ram of verse 8, Jeremiah 50, be a reference from which Daniel in the Book of Daniel; 8:21, he used the same terminology? Recall or learn that much of Daniel’s writing was inspired from what Jeremiah had written prior to their (Daniel’s) Babylonian captivity.

We do know from history that the Greeks (Alexander the Great) with their “forced captive military from conquered nations” invaded Babylon but only after it had already been conquered by the Medes and Persians 300 years earlier. We also know that the Medes and Persians amassed a significant and multi-national military that conquered Babylon killing King Belshazzar. He was the one who saw the writing on the wall and sought out Daniel to interpret it for him.

Babylon is in the southern part of Iraq today. Even though Saddam Hussain attempted to rebuild it, there is little there per population and much sand. However, we do not know 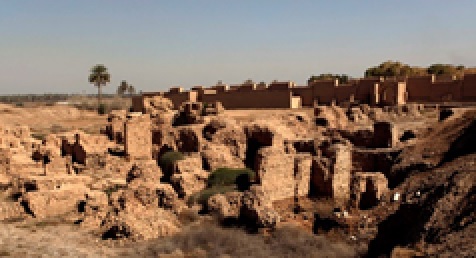 or yet understand if the “Babylon” to which Jeremiah is referring is a symbolic area under God’s future judgement upon the return Of Jesus Christ as King of kings.

Jeremiah 50:15 can be explained by a photograph of today’s Babylon. Amazingly, there are actually funds and foundations established to try and bring Babylon back to its original greatness including the “hanging Gardens” and the Lion of Babylon monument of Nebuchadnezzar.  In 2016, WMF and the State Board of Antiquities and Heritage launched a conservation program at Ishtar Gate in Babylon.

[ISV] Raise a battle cry against her on every side. She has surrendered, her pillars have fallen, her walls are thrown down. For this is the vengeance of the LORD. Take vengeance on her; as she has done, do to her. Jeremiah 50:15

Jeremiah 15:16 support the fact that Babylon practiced deportation of conquered lands. This verse tells us at the time of Babylon’s prophesied destruction, the occupants of foreign lands should “turn their face toward the own people and flee back to the land of their origin. Recall in a previous study of the Book of Daniel, we learned that less than1% of the Judean captives, including Daniel, return to Judah or Jerusalem when release by Cyrus the Great. See illustration on next page.

It was Daniel who approached the Mede-Persian conquering king and told him of the promise of the God of Heaven. Cyrus not only released those in Babylon, but his entire Kingdom. The Book of Esther proves that many Jews (Tribe of Judah) did not return. She became queen of King Xerxes (AKA: Ahasuerus)

Many times I have been asked who wrote the Book of Esther. There are two viable candidates; Mordecai and Nehemiah. In Esther 9:20 we find that Mordecai “wrote these things down.” However we also know the Nehemiah was a servant (and prophet of God; 486 B.C. to 464 B.C.)

Verse 18 and 19 tells us (actually reminds us) that God judged the Assyrians through the Babylonians and the Babylonians were judged through the Medes and Persians. God will again return and forgive the remnant of the Twelve Tribes to their Promised Lands. This has not yet happened even though we have a place called Israel today. The twelve tribes have not yet been recalled by the returning of Jesus Christ. Verse 20 says that there will be a remnant and God will “pardon” them.

Jeremiah 50:24 may hint of God’s judgement of the world by identifying this world as Babylon. You will all be judged because you challenged the Lord. V25: “…a work of the Lord GOD of the Heavenly Armies will be in the land…” Again in verse 29 God says “repay Babylon (the world?) for her deeds” against the Lord God. Why might this be the world and only symbolically identified as Babylon? In verse 33 both Israel and Judah are identified as those who have been oppressed. It was only the Judeans who were captive in the biblical Babylon. Then in verse 34 we read (ESV) that it is the world that will get rest.

Verse 37 states… “all the foreign troops that are in her midst.” Whose midst? Those within the territories of the Promised Lands. This could very well be a reference to the 200,000,000 man army discussed in Revelation 16:12. The [ESV] “drought in her waters” could also refer to the drying up of the Euphrates as it runs through Babylon also seen in Revelation 16:12. In verse 41 we read that this invading army included many kings from many nations in the north (antichrist?).

Verse 46…”certainly the world will tremble” in fear.