How might God (Trinity: Father, Son and Holy Spirit) create something that is less than excellent when in its original created form? When we read the second verse of Genesis 1 in the Holy Word of God, we can easily ask this question, but not easily conclude. We will likely be left conjecturing if doing anything other than reading a few words as a devotional or in one of our races to “read through the bible” in a year. This is why it is critically important to STUDY the Word of God; not just read it. To “study through the bible” requires dedication and certainly more than a year.

Sadly, this is the limit, content without context, of far too many so-called Bible studies; i.e. read a few verses then have a surface discussion of only the obvious, then share several “my opinions” without additional bible support of those personal opinions. Usually the discussion just reiterates or echoes the obvious. In the above example from Genesis 1:2 the discussion question would be something like… “what is form and void? What does it mean to be without?” This is a discussion type that usually takes a group of would-be bible studies to the land of nowhere. To get the rest of a bible passage we venture into STUDY; sometimes word-by-word study.

Too often one assumes that every verse or passage in the Bible is sequential without even considering that there might be a gap (time lapse) between them. Has any of us ever told a story or relived an incident in life and left out details within our sequence of events? What about the part that is left out? Might it influence or change one’s conclusion?

Example: Where were you? Answer: I was at the store. Missing or the gap in this store venture… “I also stopped over to see _____, then grabbed something to eat at a quick stop.” Would any of this additional information left out of the original change or influence YOUR analysis or conclusions of the events? Of course it would. Would the summary of “I was at the store” be the truth? Yes! It is a summary, but not an unabridged review of events.

Realizing this human example may be weak, it does make the point that additional information would help with a better conclusion. The Bible does not record every event in every historical discussion within its pages. That would require volumes; an entire library, not one bound book called the bible. This is also why 11 Timothy 2:15 tells us:

“Do your best to present yourself to God as one approved, a worker who does not need to be ashamed and who correctly handles the word of truth” (NIV)

Let’s now apply study and show ourselves approved of correctly handling the word of the truth; the gap between Genesis 1:1 and 1:2. Let’s also realize that there was a time people didn’t understand algebra, calculous or physics (Hebrew or Greek). That is, until s/he takes the time to “STUDY” and grow his or her knowledge one piece of new information at a time.

Genesis 1:1 states that “God created the Heavens and the earth… in the beginning.” This slight detour is not part of this blog, but it is part of this thought and study process. What does “in the beginning” mean to you? What does God and author of this Holy Spirit inspired book, penned by Moses, intend it to mean? It certainly doesn’t mean the beginning of God; Father, Son and Holy Spirit. They are eternal.

First, the heaven being referred to in this verse is shâmeh in the Hebrew; the skies and universe above and within our sight; telescope and Hubble space craft included. It means the beginning of when earth, the heavenly bodies we can see that surround us today were created. This all had a beginning. It will also have an end if we study the bible books of Revelation, Ezekiel, minor Prophets, Daniel, Matthew, Luke and other scripture.

Matthew 24:25 Heaven and earth will pass away, but my words will never pass away. (NIV)

Now that we better understand the words “in the beginning” and the “heaven” in Genesis 1:1, let’s increase our awareness and understanding by offering convincing knowledge of why there is very likely a GAP between 1:1 and 1:2. 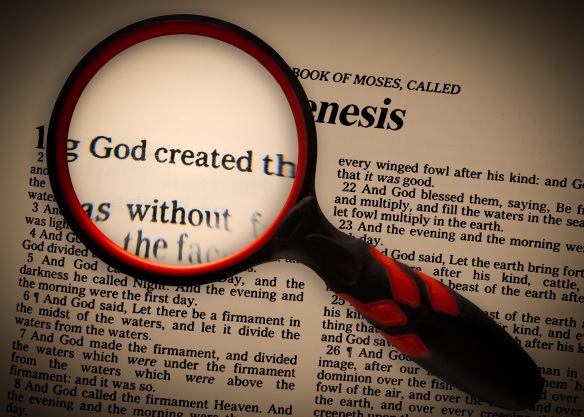 We communicate via words be they written or spoken. Even signing is a form of words and communication. The Bible is written for us to study and understand. One does not walk into a foreign language class and immediately understand without background and study of that language. This is true of the Bible; we must examine it; not just read it and express opinions without something to back up the opinion.

The creation of earth in a perfect state and before v2 that tells us it “was without form and void,” requires a bit of bible searching. Let’s go to Job 38. Job is being challenged by God himself. One question God asks of Job is (38:4) “where were you when I laid the foundation?” This questioning continues through verse 6. Then in Job 38:7 we get proof that the earth was originally created as a site to be seen: “…while the morning stars sang together and all the angels shouted for joy.” In Job 38 God is talking about the creation of our known universe and the heavenly bodies were amazed. This simply does not fit with “without form and void” as we find recorded in Genesis 1:2.

The Hebrew helps our understanding much better than do most translations: Morning stars (bôqer kôkâb) are the elite princes or angels of heaven; “sang together and *all (kôl) the angels shouted for joy.”

Not hidden but often missed is additional insight(s) into the heavens and earth of Genesis 1. First, in Job 38:7 the heavenly beings are rejoicing over the laying of the foundation and creation of the earth. If this creation was little more than dull, void, and without form, why would the prince angels and angels of heaven SHOUT with joy (amazement)? Second, the word “all” in this passage is kôl in the Hebrew. kôl according to Strong, #3605 means: the whole; any (totally inclusive). Therefore the angels and the prince angels mentioned have to be the entirety of God’s angelic creation. This also points out that Lucifer and his 1/3 of the heavenly stars (angels) he pulled with him when cast out of heaven were still amongst the heavenly bodies; not yet cast out of heaven [to earth]. On a graph it would look like the following:

God creates earth – all the angels rejoice and are amazed – Lucifer, an angel, is part of “all”

Logically and without one earning a degree in theology, we can conclude that God’s perfect creation in Genesis 1:1 somehow became a waste land in v2. Who might have an interest in wasting it? The answer is too simple but explains much. Lucifer, the “morning light and most beautiful of prince angels,” became Satan once he rebelled against God. He claimed that the earth was his domain when he tried to tempt Jesus Christ (Matthew 4:1-11) by offering him the world’s kingdoms if he would only bow and worship him (Satan). He roams to and fro upon the earth seeking whom he may devour (Job 1:7; 2:2). He wants to destroy anything beholding to or created by the God-head.

What Satan destroyed between verse 1:1 and 1:2 God redesigned beginning in verse 3 by “shedding light” upon this now formless void. The 2nd verse of Genesis 1 begins, depending on the translation being read, with words like: the [ESV], and [KJV], now [NIV], when [ISV], and etc. Let’s go directly to the Hebrew Old Testament; i.e. the Tanakh. It reads (v2): (reading left to right – translated Hebrew)… והארץ(earth) היתה(became) תהו(desolate) ובהו(empty)

Note a couple of things. There is no prefixed word like now, the, when, etc. in the original text of the Tanakh. Also the second word is “became.” This suggests earth in verse 2 is not what it was created to be in verse 1 when all of heaven rejoiced. Something happened between verse 1 and verse 2. JIV (Jim’s Introspective View): Satan was cast out of heaven to earth and he promptly made a mess of God’s creation; a vindictive attitude toward even his own creator.

Jamieson, Fausset, and Brown Commentary puts it this way:

…the earth was without form and void — or in “confusion and emptiness,” as the words are rendered in Isa_34:11. This globe, at some undescribed period, having been convulsed and broken up…

One might easily dismiss researching this topic on his or her own as it is “too complicated.” The same argument is given for only reading and not studying any scripture. All that means to this author is that one is not interested enough to do the work. This brings us back to 11 Timothy 2:15… right? Christianity is not a religion. It is a way of life and how can one determine or be convinced s/he is doing this without reading the manual?